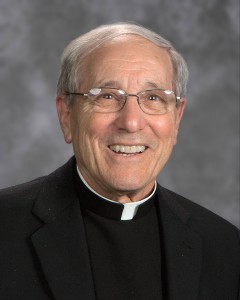 Father Fred Mannara, pastor at Most Holy Rosary Church in Syracuse, is a recent recipient of the Bishop’s Medallion. This award honors individuals who, through their care, are devoted to actively serving the people of the diocese. Through their vocation and voluntary pursuits, they have lived as models of service to others. This award stands as a testimony to their devotion and commitment to others.

After Father Mannara was ordained in 1963, he served as parochial vicar at St. Bartholomew’s in Norwich and at St. Mary of the Assumption in Binghamton.

In between his assignments at various parishes, he served as director of the faith centers at Henninger and FowlerHigh Schools in Syracuse and on the faculty of Bishop Ludden Junior/Senior High School.

Father Mannara served as pastor at Our Lady of Lourdes in Syracuse from 1983 to 1995. Before coming to Most Holy Rosary in 1998, he served as parochial vicar at St. John the Evangelist in New Hartford from 1996 to 1998.

A priest for 47 years, Father Mannara is known for his total commitment to each parish in which he has served, as well as his devotion to his parishioners.

Father Mannara was very surprised to learn that he would be awarded the Bishop’s Medallion. He said that on reflection, he felt that many other priests are deserving of the award for their wonderful deeds. “I feel grateful and honored,” Father Mannara said. “It is especially appropriate during this Year For Priests.”

He said he felt humbled when he learned that many Most Holy Rosary parishioners and his friends have planned to attend the dinner at a considerable personal expense.

When asked why he is so dedicated to his parishioners, Father Mannara replied, “I love the church. I have a relationship with the Lord Jesus whose priesthood I share. I’m inspired to do as much as I can because of the people’s response. They encourage me — it’s very rewarding.”